Editor’s Note – There are many benefits of choosing straw bale gardening over traditional soil gardening. The adventurous yardfarmer can try this method and see that the raised height and extended planting season of straw bales are some of the benefits from this unique way of planting and growing crops.

This article + infographic was originally posted on FIX.com and written by Joel Karsten.

For approximately 6,000 years, humans have grown food, farmed, and gardened essentially the same way. We’ve been told to turn over the soil, plant seeds, pull weeds all summer, and deal with weather, pests, and diseases. But all this can change with a little ingenuity and some straw. Read on for a detailed explanation of the benefits of straw bale gardening.

From Soil to Straw

Straw bale gardening veers from the traditional approach to gardening in soil. Rather than planting in soil, gardeners plant directly into a straw bale. The plant roots then take up nutrients from the rapidly decomposing straw inside. Here’s how it works.

Once the bales are put into the desired position, the conditioning process begins. The digestive process of insects, worms, fungi, mold, and bacteria (the most important decomposer) breaks down the straw. This period of 12 to 18 days – depending on whether the gardener takes a traditional or an organic approach to the applied nitrogen source – involves keeping the bales wet and introducing nitrogen as a food source for the bacteria inside the bales. This food source and water supply, along with temperatures above 45 degrees, encourages the rapid reproduction of bacteria in the core of the bale. The bacteria will reproduce or divide about every 15 minutes given these ideal conditions.

While bacteria are too small for us to see without a microscope, they reproduce rapidly inside the straw bales. Once colonized, the bacteria then break down the cells of the straw into usable nutrient molecules, which a new plant root can absorb. During this initial conditioning period, the inside of the bales becomes new “soil.” It is this newly formed virgin soil that sustains the new plant roots and provides the nutrient molecules necessary to grow. Nothing will grow in a raw bale of straw – plants will yellow, wither, and likely die – so make sure you condition the bales properly prior to planting into them.

How to Plant in Straw Bales

To plant transplants, simply use your fist to burrow a hole into the softened straw bale. You can also use pliers to pull out some straw to start a hole. Use a small amount of potting mix or planting mix, purchased from a garden supply store, to make a weed-, disease-, and insect-free seedbed approximately 1 to 2 inches deep on top of each bale. Nest the seeds in this layer of potting mix to get the best germination rate and to hold a bit of moisture around the seed coat until germination is achieved. Avoid using traditional soil on top of a straw bale garden, or you’ll risk the introduction of weed seeds, disease spores, and insect larva. Use a handful of the planting mix around a transplant, if necessary, to seal up and cover any exposed roots.

For first-time straw bale gardeners, remember this: around day 12 or 18, the straw bale will still look like straw and unlike anything you’ve ever planted in. Despite any anxiety, this is the time to trust the method, understand the science and its many benefits, and forge ahead with planting.

Once conditioned, the bales are ready to plant. Because the inside of the bale has become new soil (at this point, it will not resemble typical soil, but biologically, the decomposing straw has become early-stage soil), there is no carry-over of disease or fungal spores that often remain in soil from season to season. The same goes for insect issues. Over the winter, many insects lie dormant in existing soil and then attack plant roots the following spring.

When put under a microscope, a shovel of soil from even the most meticulously maintained garden reveals thousands of weed seeds. Weed seeds enter soil through various channels. They can be blown in by the wind or carried in with manure. Weed seeds can remain viable in the topsoil for up to 25 years. Given the correct conditions, a seed can germinate and sprout at any time. Since the bales contain virgin soil, none of these conventional soil gardening issues arise. No disease spores, insect larva, or weed seeds are present in the newly generated soil inside of the bales, which eliminates many of the chips stacked against the traditional gardener. 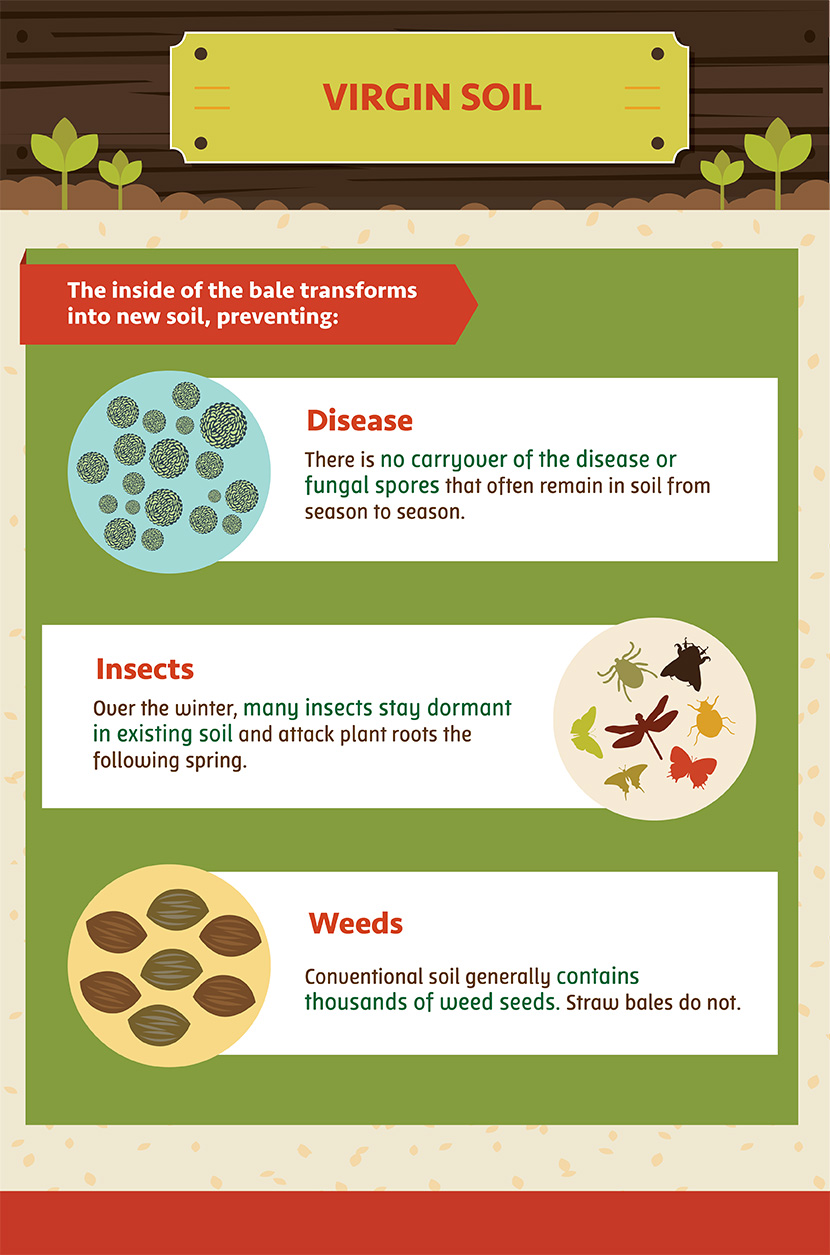 For many seasoned gardeners, there may come a time when the physical requirements to maintain a soil garden become limiting. With the raised height of the bales, there is less of a need to bend over, and a good portion of the planting can be done from a lawn chair placed next to the bale. Once the bales are positioned, the physical part of the straw bale garden is complete. The remainder of the labor can be accomplished with a hand trowel and pruning shears. Planting in bales allows people with physical limitations to garden for many years. 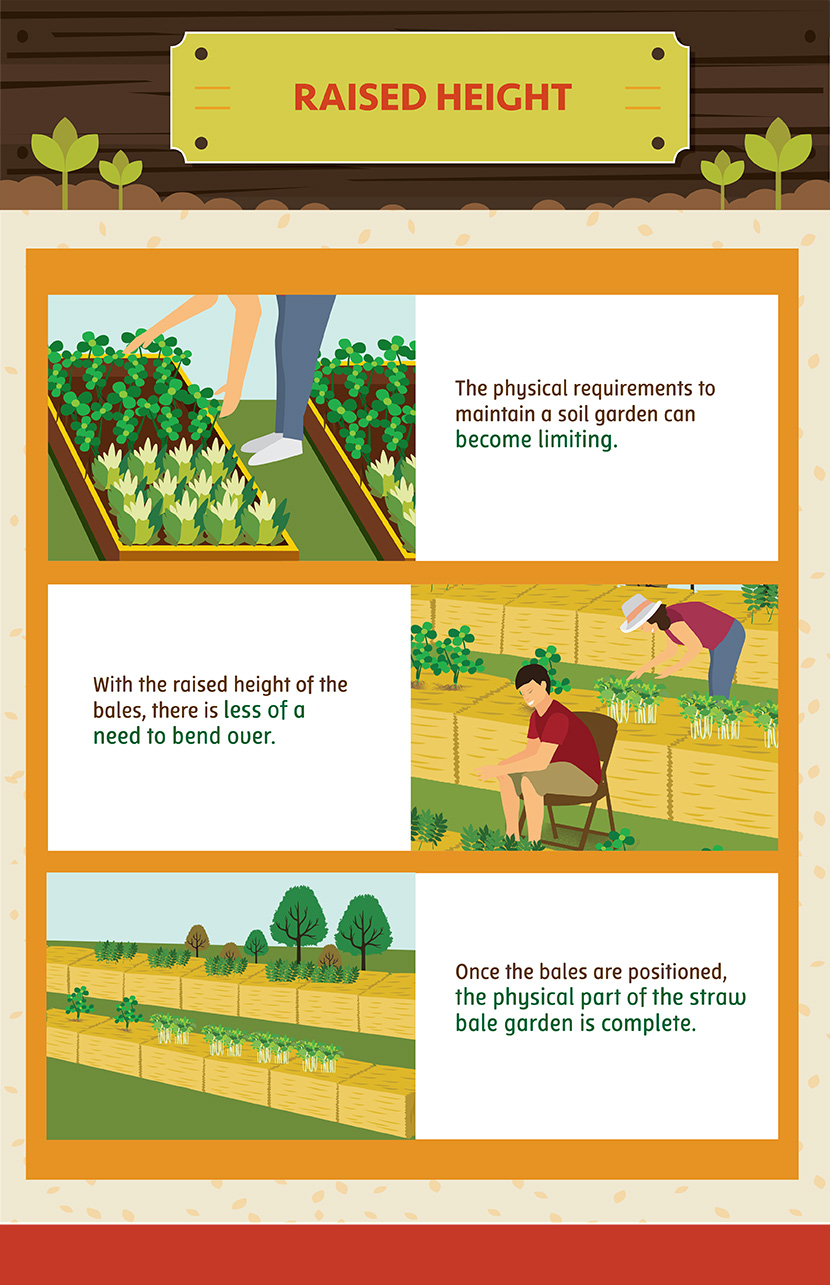 During the conditioning process, bacteria reproduce inside the bale at a rapid rate. Each time a bacteria cell divides, it pinches in the middle of the cell and vibrates rapidly, which causes friction and gives off a tiny amount of heat.

It is these billions of bacteria, all rapidly growing and dividing, that literally heat up the bale. Temperatures can get very warm – far too hot for the roots of a plant to survive during this time. This is why planting is put off until the temperatures drop inside the bales – roughly 12 days after the conditioning process began – or, in the case of an organic gardener using an organic source of nitrogen, 18 days. A temperature check with a thermometer or a bare hand stuck into the center of the bale will give a good idea of whether the bales are below 100 degrees F, at which point they are safe to plant or seed.

If you time it right, you can begin the conditioning process 20 to 25 days prior to the last frost date and plant even a week or 10 days before the last frost. Cooled to less than 100 degrees F, the bales will still be much warmer than the surrounding soil temperatures.

This provides a warmer root zone and a burst of heat for transplant roots or a newly germinated seed on top of the bale. This extra boost of heat can lead to much faster root development, earlier flowering and fruit set, and ripened crops weeks before a traditional soil garden in the same location. If cold nighttime air temperatures threaten, cover the bales with a plastic tent to hold in the heat radiating from the bales and protect exposed foliage above the bales. 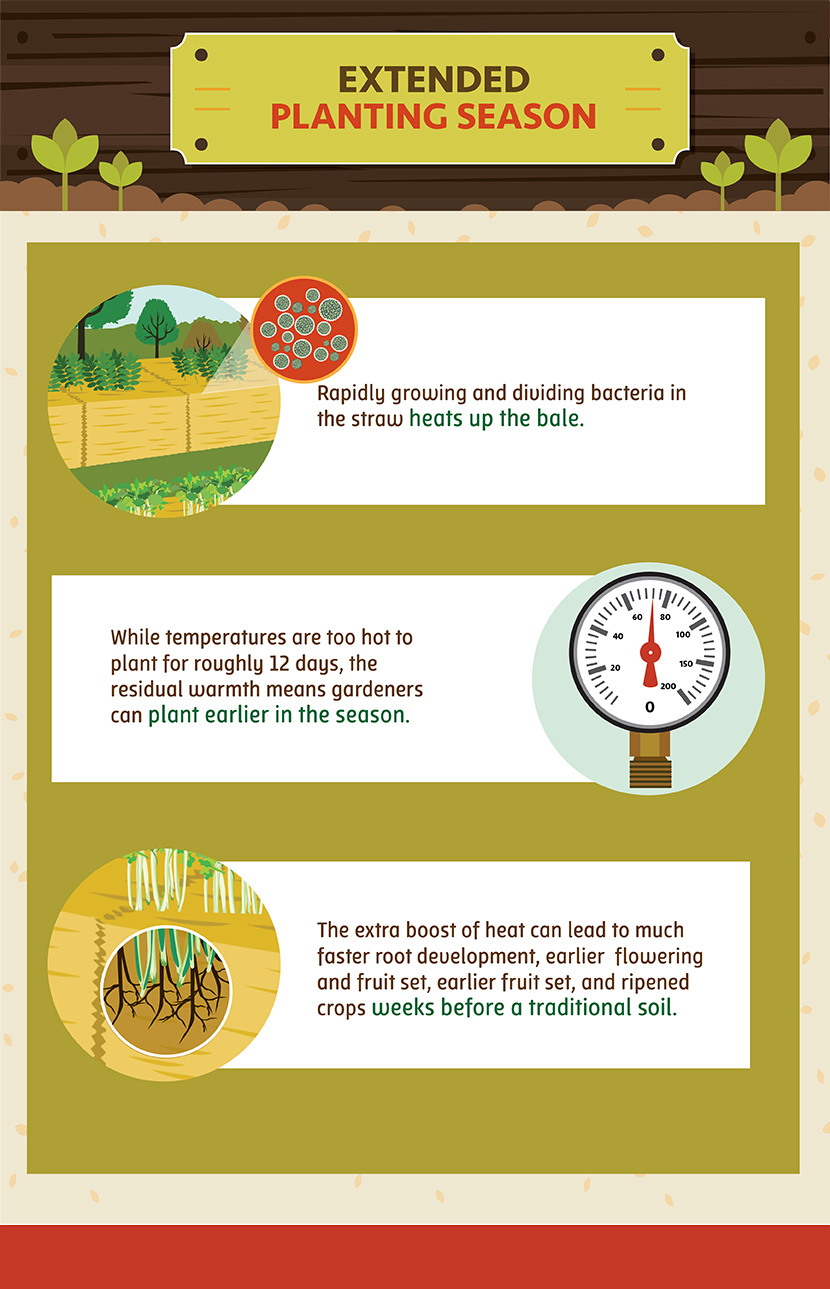 To grow a successful garden, you don’t need soil, but you do need three things: full sun exposure, a good water source, and a few bales of straw. The surface underneath the bales is completely irrelevant to the growing plants. Many straw bale gardens have been set up on asphalt or concrete, or on rooftops in urban areas. Just make sure your plants have at least six to eight hours of full sun exposure. Without it, the plants may have difficulty producing enough energy through photosynthesis to grow healthy, strong, and productive vegetables or beautiful large flowers.

If installing a straw bale garden over the surface of soil with a known level of contamination, first install a layer of durable ground cloth fabric to prevent roots from growing through the bales and down into the contaminated soil. This is especially a concern with vegetable plants that grow excessively large root systems, such as tomatoes. 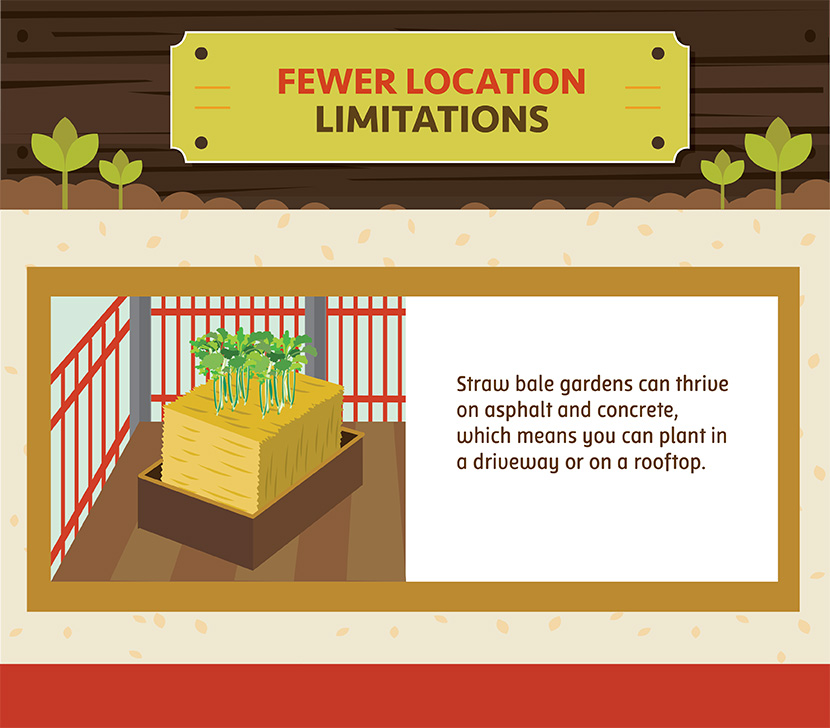 The main agricultural use for straw bales is livestock bedding. The long, narrow, hollow stalks easily fill up with droplets of water and livestock waste, which become trapped inside the tubes by a natural attraction called cohesion. This attraction allows a dry bale of straw to absorb and hold three to five gallons of water, which helps keep barns dry.

In the case of straw bale gardening, the moisture trapped in the bale provides a steady supply of water for the tiny developing root hairs of vegetable plants or flowers. While a bale has an amazing capacity to hold moisture, once fully saturated, it won’t hold one more drop and cannot be overwatered. Gravity carries excess water out through the bottom of the bale, so roots are safe from flooding. Additionally, a straw bale contains many air spaces between particles and inside stalks, which allows air exchange for roots. Unlike traditional soils, no footsteps or wheels will ever compact the bales and damage young plants.

When the leaves of ornamental or vegetable plants are continually moist, there is a higher risk of fungal diseases and insects in a garden. The fungal spores require moisture to reproduce and spread, and insects generally like to lay eggs in moisture-rich environments to increase the viability of their egg sacs or larva.

The goal of a gardener should always be to keep the leaves in the garden as dry as possible, even while providing adequate moisture for the roots of each plant. Utilize a soaker hose or drip-style irrigation system to keep the roots wet but prevent the foliage above the bales from getting wet. Consider automating your watering to allow for short spurts at the beginning of the season, and then increase the frequency as the demand for water increases with plant growth and as the heat of summer arrives.

A tall trellis above the row of bales is also a key element in straw bale gardening success. Encouraging vines and climbers to crawl vertically high above the bales opens up their canopy of leaves to better air circulation and sun exposure and keeps the surfaces of the leaves dry. Trellises change the entire culture of the garden and are another way to help prevent disease infestation and insect propagation in a straw bale garden. 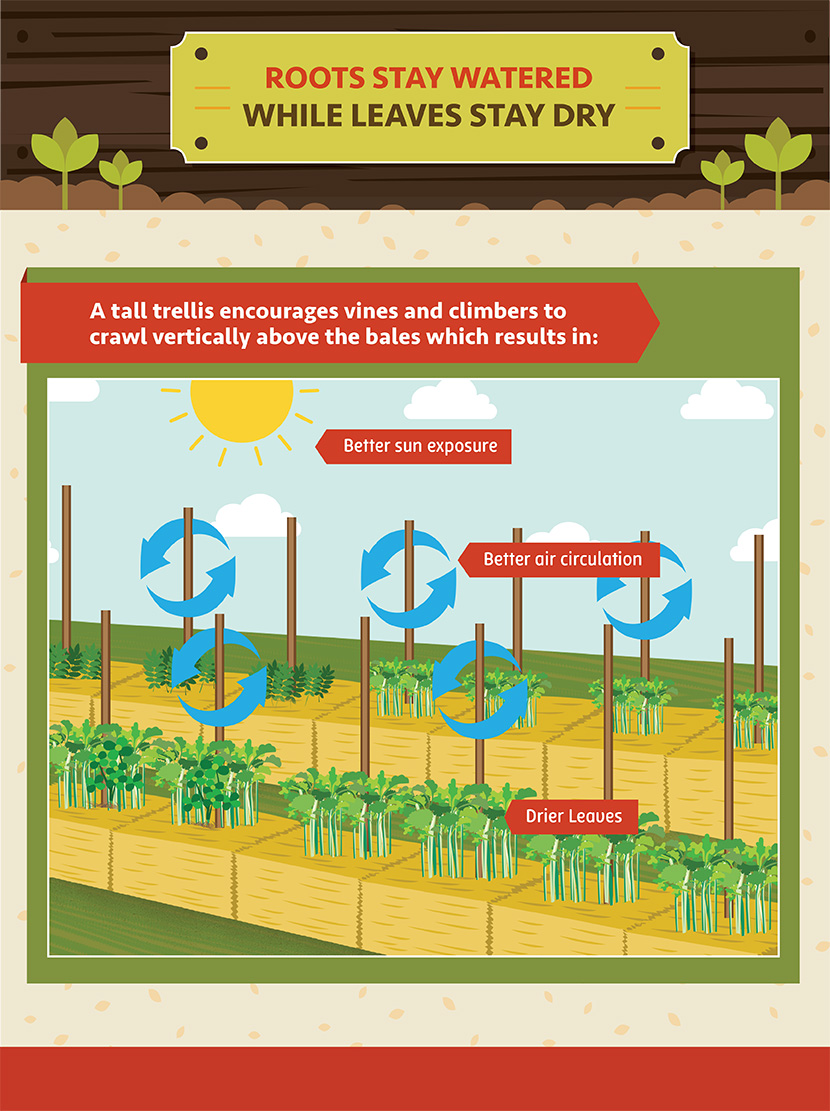 After the Straw Bale Garden

Once the season is over, evaluate the condition of the bales. On occasion, a highly compressed bale will last for another gardening season. Use it again if the bale seems viable, but keep in mind that it will not heat up again the following spring; the heat will only come from freshly composing organic material. Most bales shrink dramatically in size but still contain plenty of nutritious composted straw. The compost is extraordinarily useful in many other areas of a garden. Use it to mulch around perennials, trees, and shrubs or to fill up window boxes or planting containers. The mulch is as desirable for these purposes as expensive planting mix from a garden center. Work the compost into other troubled areas of a traditional garden in an effort to improve the soil. The lush compost may be one of the greatest benefits of straw bale gardening.

About the author – Joel Karsten’s ideas on straw bale gardening have been embraced globally, making bestsellers of his books, in many languages. Karsten has a B.Sc. in Horticulture from the University of Minnesota, and spends his time gardening and doing research.