Editor’s Note – Rooftop gardens can provide a simple solution to a large problem in Gaza. They can increase food security and create more green spaces for the area, which is very densely populated.

This article was originally posted on FUTUREPERFECT and written by Sharif H. AlSharif.

The demographic crisis is turning Gaza into a concrete jungle, green space is lacking. Rooftop agriculture is a small solution for a big problem.

“Building a model that can be multiplied and used by Palestinian citizens in Gaza is worthwhile and easy to achieve because of its impressive simplicity”, Ahmed Saleh explains. The agricultural engineer has made a first step towards alleviating a number of great problems facing the population of the Gaza strip. The area has been under Israeli blockade since 2007, resulting in 44 per cent of Gazans being food insecure according to the United Nations. Gaza is one of the most densely populated areas in the Middle East with more than 4500 people inhabiting one square kilometre. The total area encompasses 365 square kilometres only. 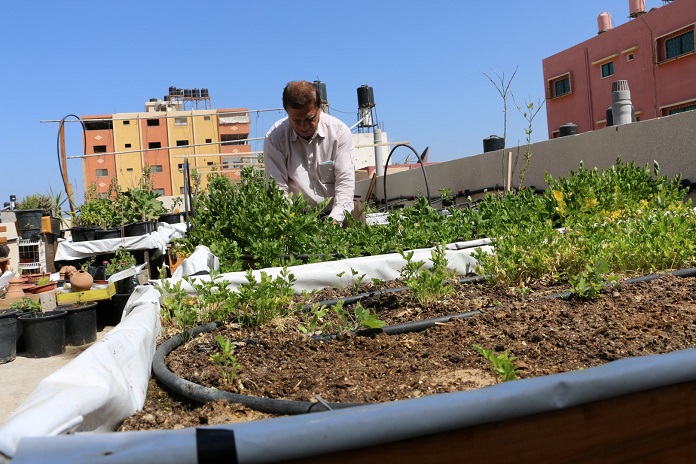 The situation is very complex also for Gaza’s farmers. Data from the UN’s Food and Agricultural Organization shows that the 2014 war on Gaza destroyed more than 16203 dunams, i.e. more than 16 square kilometres, of arable land, greenhouses and irrigation systems. Beyond that, most of the area’s agricultural facilities are located near the “buffer zone”, a border barrier between the Gaza Strip and Israel constructed by the latter in 1994. The barrier makes it very hard for farmers to reach their farmland.

According to a 2012 report by the UN agency addressing the situation of Palestinian refugees, UNRWA, Gaza will be an unliveable place by 2020. The report predicts that the population will increase to 2.13 million people, reaching a population density of 5,835 people per square kilometre. If the political and economic situation does not change, it will be impossible for the basic infrastructure to meet the growing population’s needs for electricity, water and sanitation. This will also be reflected in Gaza’s inability to grow its own food. 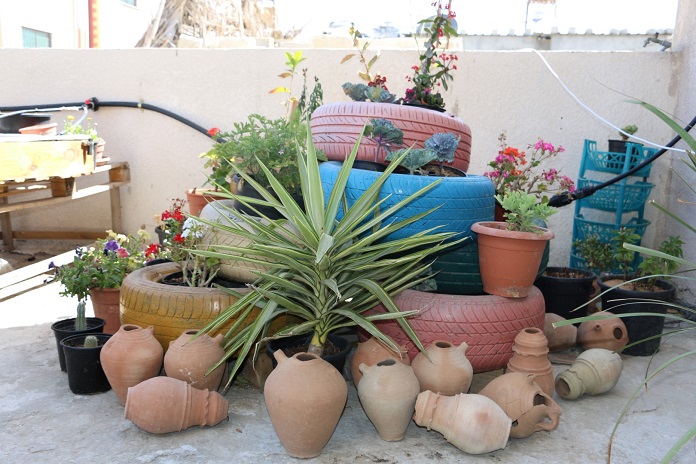 In search of a solution, Ahmed Saleh, citizen of Gaza, started his own roof garden. His idea was to use the space to plant vegetables. A PhD in agricultural engineering, he first came up with the idea when studying different approaches of roof gardening and urban agriculture, searching and communicating with his fellow specialists in agriculture. When Ahmed Saleh started to move from theory to practice, he followed a model of two steps in order to achieve the best results: First, he collected scrap and garbage such as old tires and wooden boxes in order to use them as planting containers. He also created an effective watering system, connecting a main water tank to the planting containers using recycled water pipes. Second, he fertilized the soil using chicken and fish waste.

He then set out on some test growing, planting lettuce, oregano, celery, onions, tomatoes, pepper and eggplant, and trying to identify the crops that survive best under the local conditions. Results started to show soon: Some plants were steadily growing, while others died. Studying and researching, Ahmed Saleh improved his crops continuously. After a while, he was able to identify the reasons behind the failure of some crops and improve his yields. Further techniques in his roof garden might one day include a fish farm functioning both as a watering system (with water returning to the plants) and as fertilizer (using the fish waste).

More than it looks 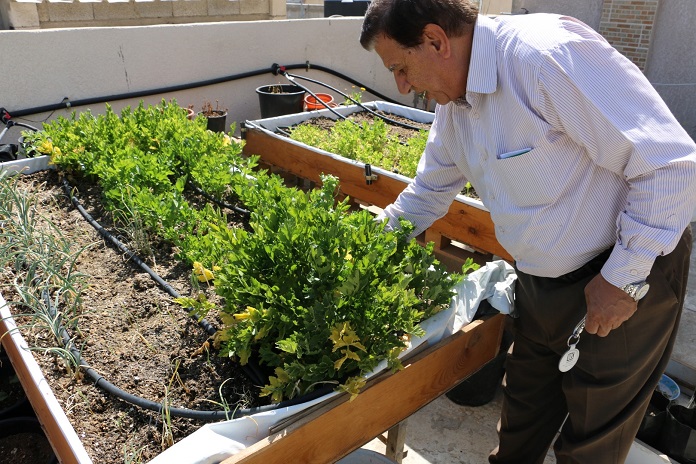 “This simple garden is a lot more than it looks”, says Ahmed Saleh. Roof gardens could not only provide a way of securing food for whole families and for achieving self-sufficiency – they also help to keep an eye on the use of agrochemicals and pesticides, which can cause many diseases, Saleh explains. Moreover, gardens like Saleh’s offer a healthy way to release tension. They can help social bonds to grow stronger, as the success of a garden depends on a collective effort. Plus: “Children love planting and seeing their efforts materialize into crops. This can increase their sense of belonging and volunteering.”, Saleh adds.

With the average of 500 US dollars per 50 metre rooftop unit, the cost of roof gardening is reasonable compared to its benefits. By being able to cover the needs of whole families in the long run, gardening can greatly reduce the expenses for food in daily life. Plus, the model is very flexible. Plants can grow vertically or horizontally, and by increasing the number of containers or by taking more space on the rooftop, families may have bountiful crops.

While Ahmed Saleh is eager to see his idea multiplied, a single effort in this direction is not enough. Working together with local organizations and donors to promote the effectiveness of the roof gardens will be essential, as the objective is to create more gardens following Saleh’s example. Neighbours and many people are open to the idea and eager to try it with their own hands, on their own roofs. Turning roof gardening into a movement would be one answer to various economic and social struggles in Gaza’s near future. 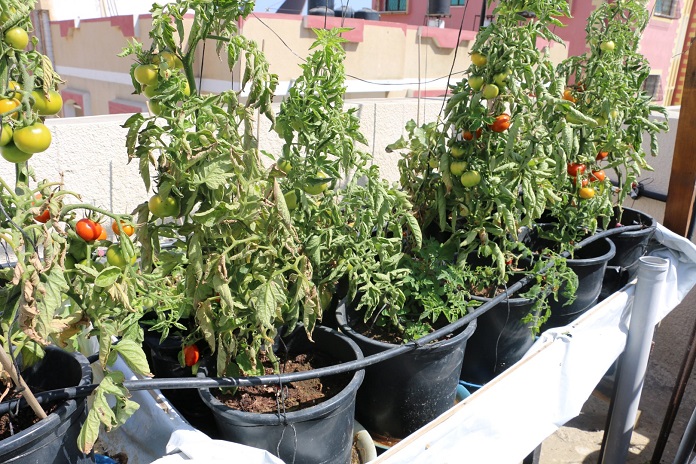 Sharif H. AlSharif was born in Kuwait, raised in Bolivia and is now living in Palestine. Sharif holds a bachelor’s degree in Business. His work experience includes journalism, project management, and he is specialized in youth issues. All photos are taken by AlSharif.