Editor’s Note – Have you ever heard of matrix gardening? If not, find out all about it below!

This article was originally posted on FIX.com and written by Robin Horton.

With an increasing interest in biodiversity and sustainable gardening practices that rely on natural pest-control methods, naturalistic approaches to gardening are growing in popularity.

In contrast to the perfectly clipped hedges and neatly planted rows of precious plants often found in traditional gardens, the naturalistic garden – often referred to as enhanced nature, the new style,American Style, Prairie Style, or New Perennial Movement – is a self-sustaining garden composed of a series of well-chosen and diverse plant species that balance and nurture each other. The result is a garden which has year-round interest and, although it is carefully designed, appears unstudied.

These gardens are not only attractive to people, but to birds, butterflies, and other native wildlife as well. Naturalistic gardens require less maintenance than traditional gardens – especially those with lawns. They save time and expense as they reduce the need for and use of pesticides and fertilizers – and don’t require mowing. 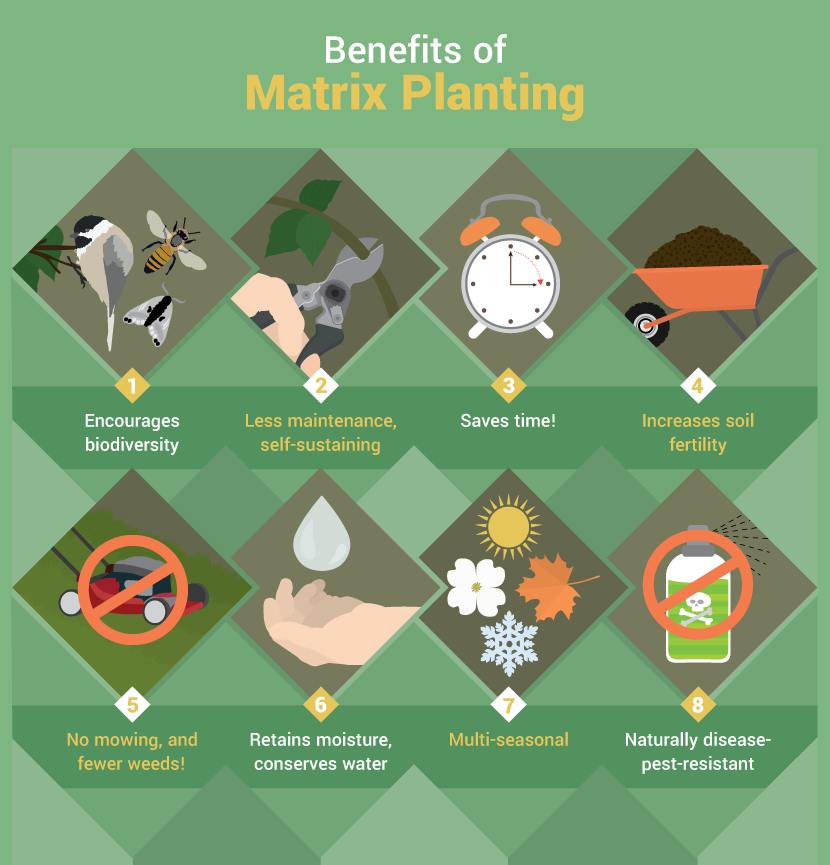 Much in the way a dense field of wildflowers flourishes without human intervention, matrix planting is a way of gardening used to create a naturalistic garden. Matrix planting replicates what is found in natural vegetation, where a variety of plant species grow together harmoniously, supporting each other to form a self-sustaining community that nourishes and protects itself against invasive weeds and pests.

Think of the land in a naturalistic garden as a matrix consisting of a large number of small ground-cover plants scattered with a few large “emergent” plants. Matrix planting creates multi-dimensional communities of plants by successively layering the vegetation, one above the other. Sunlight filters from the top through a succession of layers down to the ground level, which contains plants needing little light.

Dutch garden designer Piet Oudolf, a leader in the “New Perennial” movement known for his design of New York City’s elevated High Line Park and Chicago’s Lurie Gardens, among others, describes matrix planting as a method where a “single species or handful of species dominates the planting, forming a matrix into which other plants are blended.” These “matrix” plants, often grasses, become the foundation for and the element that unifies the complete landscape design.

Oudolf uses a fruitcake as a metaphor to describe this method of planting: small plants are distributed across the larger plant matrix like nuts and fruits are scattered through the fruitcake dough matrix.

Oudolf describes his matrix planting method as “a complicated layering of seasonality, energy, endurance and reward – both before, during, and after flowering.”

Some Key Elements of Matrix Planting

Some of the key elements which distinguish matrix planting are: 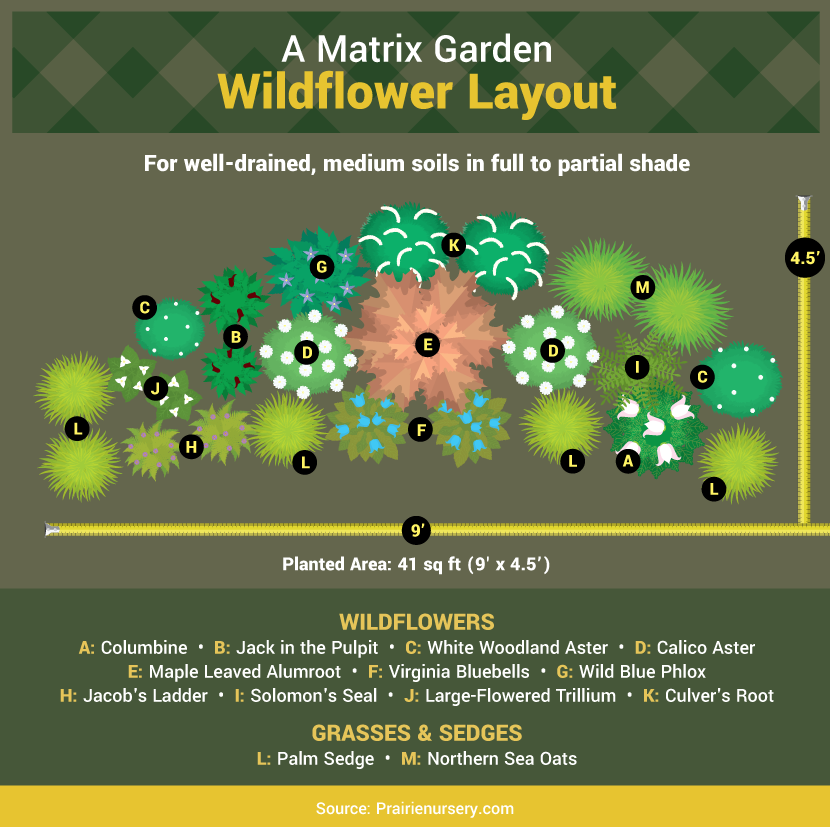 Like permaculture, which emulates the patterns and processes found in self-sustaining natural ecosystems, matrix planting involves planting layered or stacked plant guilds – designed groupings of plants which enhance and work in support of each other, minimizing competition for sun and nutrients.

Unlike the three to five plants often suggested for traditional garden plans, a naturalistic or prairie-style garden contains more diversity, generally incorporating a minimum of 11 plants in each group.1

Wolfgang Oehme, known along with James van Sweden as the founders of the New American Garden movement, states that this type of natural garden requires plants with these four qualities: stability, robustness, flowering duration, and competitiveness, for which he cites Periscaria polymorpha as the benchmark plant.

Royal Horticulture Society partners Paul and Pauline McBride of Sussex Prairie Gardens suggest not cutting back plants until late February or early March, in order to provide winter habitat and seed for wildlife such as goldfinches. The gardener duo also suggests selecting plants that look attractive not just in flower, but also after they have died back, when their seed heads are covered in frost.

To create impact, select 20-30 plants instead of 200 different plants, then plant them in groups of 12-20, rather than the usual three to five of traditional gardens. 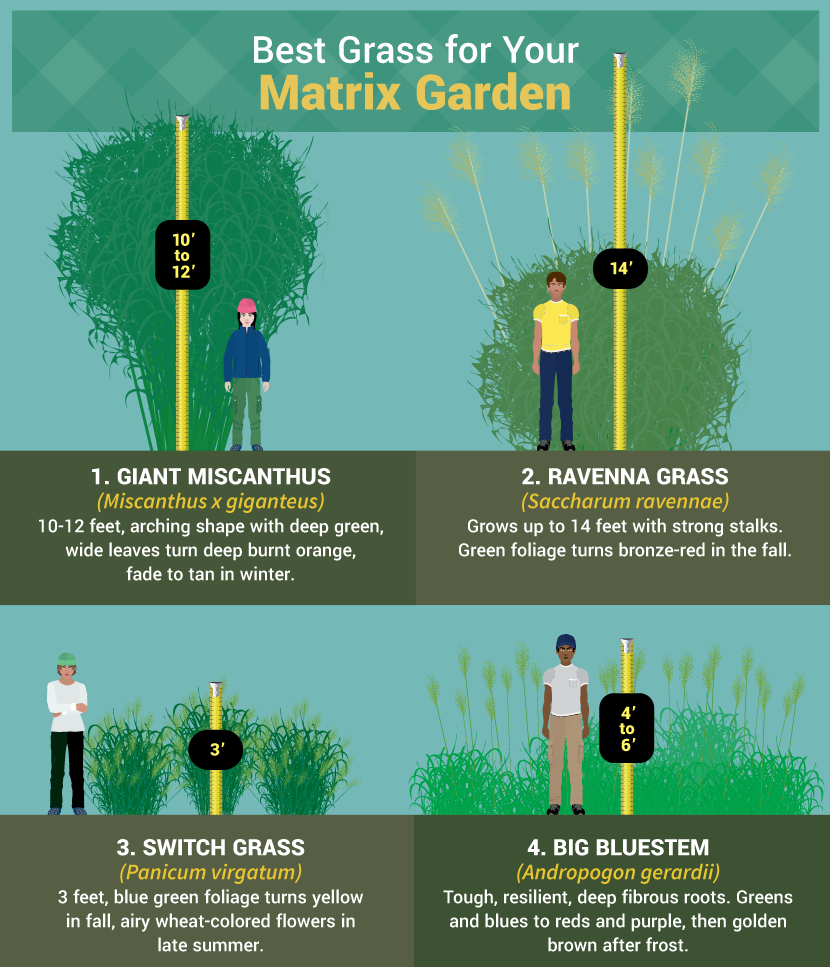 Choose plants that partner well, like those which are the same color but different shapes. In each grouping, add dimension, texture, and movement and extend the season by placing spring and summer bulbs such as camassias or alliums in between grasses.2 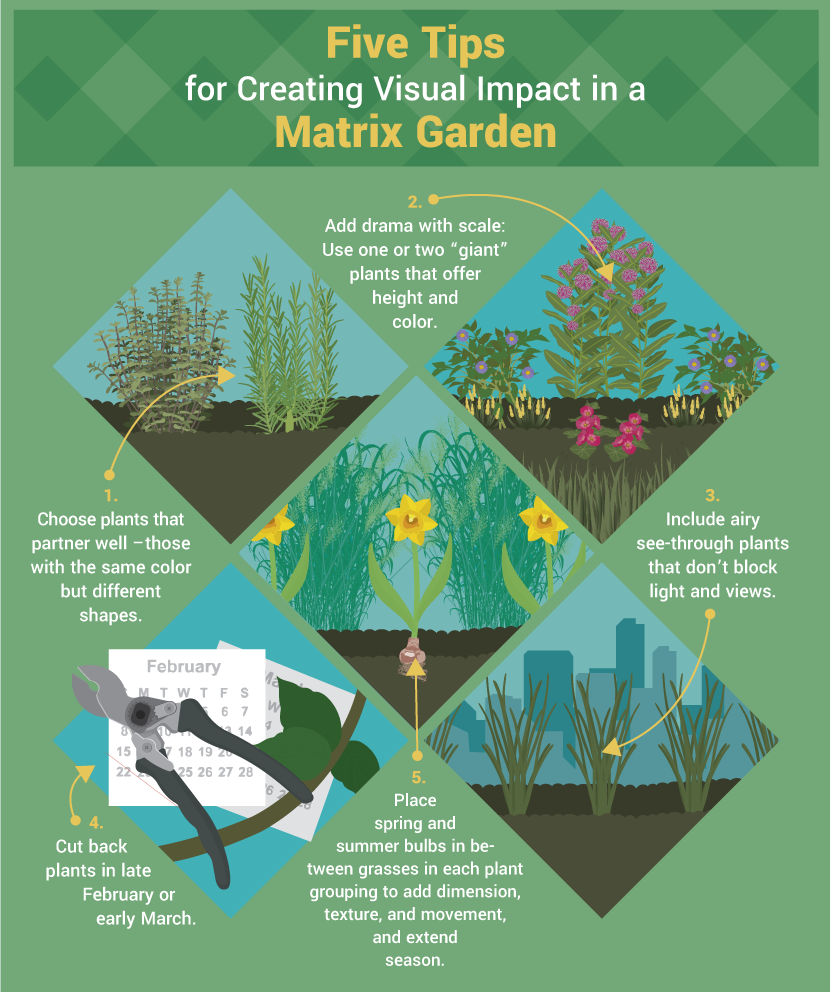 Try the matrix model in your garden. Less maintenance means more time on your hands to plan your next garden. It’s a natural.