Editor’s Note – Delicious food can bring people from all backgrounds together. These homeless cooks create appetizing meals for the public with food that would have otherwise been thrown away.

This article was originally posted on FUTUREPERFECT and written by Kateřina Jonášová.

When homeless women cook for the public, the prejudices melt. Jako doma, a Prague NGO, gives the stage to the cooks – and a voice.

Ending up on the street is easy. It takes just one wrong step – and sometimes not even that. It’s enough if your partner dies and leaves debts behind. Or when you get thrown out of your home or leave the orphanage and have nowhere to go. Eva, Helena, Kačka and Zuzka can also speak to this. They work with Jako doma (Like Home), an NGO implementing a mobile kitchen project. Homeless women prepare food, offering meals and life stories to passers-by.

A number of NGOs in the Czech Republic address the problem of homelessness. However, none of them specifically target women, although there are about 6,000 female homeless persons in the country. “Having worked on other feminist issues, we knew from our research that where social services are designed for both men and women, women will often not use them for fear of the violence which they’ve experienced in these contexts,” says Lexa Doleželová, who co-founded Jako doma in 2012. 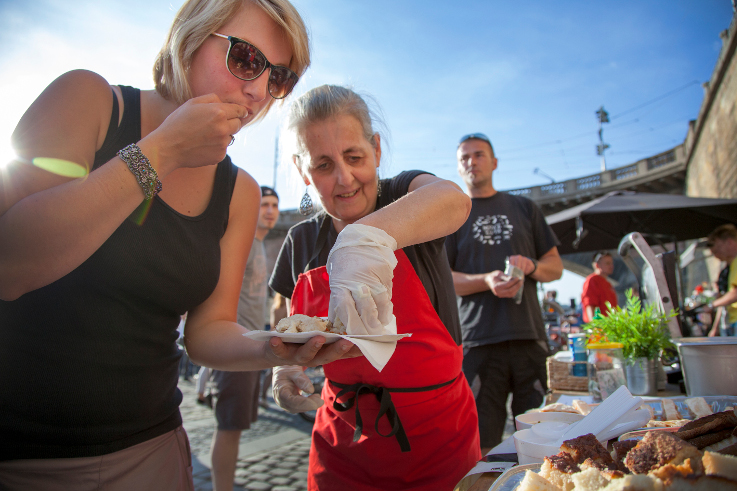 The bistro of the homeless cooks at the bank of the Vltava River. Photo (CC): Zdeňka Hanáková

The Náplavka riverbank in Prague is a busy place. It is full of bars, with people sitting at outdoor cafés or simply on the ground, engrossed in music as the sun goes down. The Homeless Cooks (‘Kuchařky bez domova’) have put up their red stall next to the iconic Bajkazyl Bar. The fruits of today’s kitchen session are beginning to appear on the table: vegetable soup, toasts and soufflé. The Homeless Cooks prepare vegan dishes using their own recipes. The meals are free of charge to homeless people. Everyone else is asked to make a voluntary donation. The cooks, smiling and dressed in red aprons and T-shirts bearing the inscription ‘The Streets Are My Life’, invite passers-by to taste the meals. “I enjoy cooking. It’s work, plus we get to spend some time with normal people,” says Zuzka.

The Homeless Cooks are regularly seen at Náplavka, as well as at numerous events throughout Prague. “From the beginning, our vision was to run a cooking-related service. We were inspired by a Copenhagen bistro which had volunteers and homeless people preparing food from ingredients that would otherwise have been discarded. What we’re doing is reverse charity: homeless women cook for the public. And the response from the people has been positive; they like buying food from our girls,” says Lexa Doleželová. 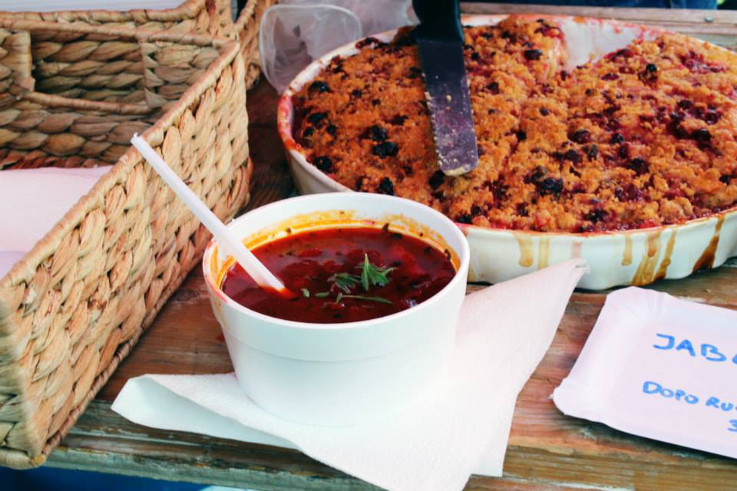 The vegan meals are prepared for the guests. Photo (CC): Zdeňka Hanáková

The first such cooking event took place in spring 2013 at a farmers’ market in Prague’s Karlín area. Red food stalls featuring an average of 15 cooks have since become a regular meeting point for the public and homeless people – two otherwise very distant groups. Homeless women often feel ashamed of their status and tend to be stigmatised by the public. Good food, though, removes the barriers, giving people the opportunity to look these women in the eyes, hear brief versions of their life stories, and search for more humanity and solidarity within themselves. “When I’m in a red apron and protected by Jako doma, it’s great. People accept me and shake my hand, listen to me, and take food from me. Once I take my apron off, put on my backpack and grab my plastic bag, though, I again become the rotten woman that doesn’t deserve any help,” says Helena.

No doors in the streets

“It’s December 23, Wednesday morning. At 6:30 we get thrown out into the cold again. Just like every day, week after week, month after month. I’m going straight to work, I’ve got a temporary job. There was only a little cleaning to do today, so we’re done pretty quickly and I’m headed to the Pernerka shelter to warm myself up. I have a cup of coffee and immediately fall asleep. It’s warm there and my flu medication starts to kick in. When I wake up, I go to find out about the occupancy status of the dorm. To my great joy, there’s one last place free. On Christmas Eve, I wake up in a bed.” The diary of Eva Kundrátová, another member of Homeless Cooks, is replete with similar observations.

The streets took away Eva’s illusions about people, but gave her a different perspective on the world, a greater sensitivity. And also a taste for recording her experiences, sharing them and changing the view of others on those without a home. Eva and her diary hold up a kind of mirror to the overfed consumer society. “You sleep with one eye open and are constantly on the watch so you don’t get beaten up or pickpocketed. Security, that’s being able to come home and shut the door behind you. But there are no doors in the streets,” says Eva Kundrátová, addressing a Prague conference on homelessness.

A voice, a pair of legs 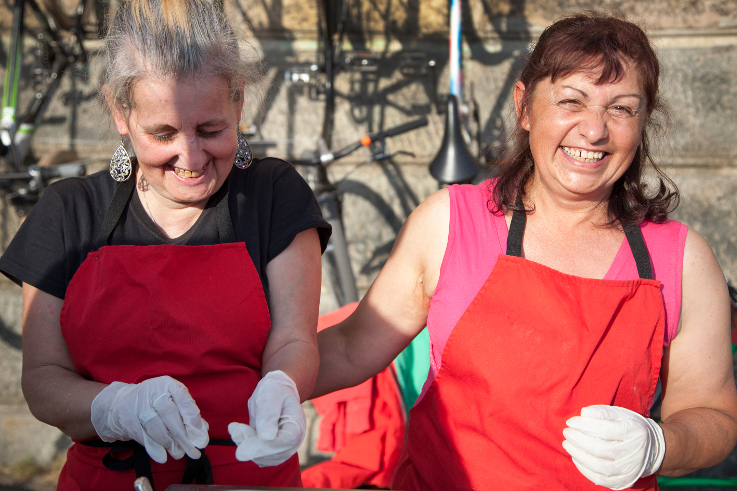 In addition to specific support, Jako doma gives a voice to women in difficult situations. It invites them to speak for themselves and empowers them to advocate for their rights. “With the girls from Jako doma I’ve had the chance of getting into some of the nicest places around Prague where the various conferences I speak at take place. I went to Vienna to the SozialMarie award ceremony; now I’m here with you doing an interview. I’d never have experienced that without “Jako doma” and without living on the streets. I live on the streets and I’m proud,” says Eva in a café in Prague’s Žižkov area.

“Having spent two years on the streets, I realised how little I need to live. Just a little bit of money and getting along well with people. What bothers me most is how food is thrown away. Take the supermarkets, for example: instead of giving the excess food to people in the streets, they trample it or pour disinfectant over it. I’ve seen it happen with my own eyes.” Once the interview is over, Eva sets out to take care of a homeless wheelchair-bound lady. She says she’s “her legs”. Eva hopes to become an official street worker one day. As she’s been active in the streets and people know her, she can provide help where it’s most needed – as opposed to the white-collar system burdened with bureaucracy.

P.S.
“You feel like you’ve got no strength left,
It’s getting dark, don’t give up yet,
Wake up, you must carry on,
While others’ hopes might be forlorn,
You’ve got to get up and live again,
You can’t just jump off that train…”
A snippet from a song included in the “ONY” therapeutic theatrical performances staged by Kateřina Jungová and the clients of “Jako doma”.

Kateřina Jonášová is a journalist and playwright. She is Editor-in-Chief of the “Učíme se příběhy (Learning from Stories)” project and lives in the countryside just outside Prague.