Yardfarmers creator Erik Assadourian sat down with Cullen Pope, editor of EATT Magazine, a few weeks back and we wanted to repost the interview here. EATT Magazine shares stories about passionate, generous spirited people, and the journeys they make in our world and work to encourage more people to be a force for positive change, wherever they are. You can find out more about EATT Magazine, download their app, and listen to recent podcasts on their website.

Last week, we joined Erik Assadourian, creator of the upcoming reality TV show Yardfarmers and asked him why in the world a sustainability researcher would jump into the baser world of reality TV.

Cullen: Erik, quite simply, why would you?

Erik: Fair question! And one I’ve asked myself many times as I’ve navigated the world of reality television over the past year.

I’ve been a researcher at the Worldwatch Institute for over 13 years, writing on a variety of sustainability issues and urging people to change course, along with many others. But in this time the state of the world has even more challenges with the global population growing by 75 million each year, more people become consumers (which is actually celebrated!), and climate change has passed beyond the point of gentle management.

The idea that we’ll be able to maintain and even expand the consumer economy in this scenario is absurd—driven more by magical thinking than by ecological realities.

Hence, over the past few years my work has increasingly focused on opening up a political space to discuss the taboo topic of “economic degrowth.” Essentially how do we intentionally contract overdeveloped economies like the United States and Australia to get back within ecological limits while preserving the best elements of modern development (antibiotics, vaccines, democracy, etc.)? Not making these proactive steps will mean that the planet will do it for us, and the Earth will do it in far less comfortable ways than we’d choose.

Cullen: So what does yardfarming have to do with this?

Erik: Right now, most Americans are almost completely dependent on the consumer economy for their livelihoods and the global food trade for their sustenance—even getting apples from Australia and New Zealand when apples are in season right in their own communities. This has led to massive environmental problems, from factory farms and food miles to over reliance on pesticides, fertilizers, and GMOs. It’s also led to many health issues, including the obesity epidemic and related diseases like diabetes and heart disease—caused in large part by too much time sitting at desks or in cars, and too much food available, especially unhealthy foods while healthier vegetables are either inaccessible or relatively too expensive.

So how do we create new jobs, rebuild local economies, bring back local agriculture, and make societies more resilient to climate change and potential disruptions in global food trade?

In America, where our fifth largest crop by acreage is the lawn, the answer seemed obvious to me: convert America’s 40 million acres of lawns into sustainable “yardfarms.” In the process, we could reduce demand for industrial agriculture, reduce emissions from lawn mowing, and reduce the three million tons of chemical fertilizers and 30,000 tons of pesticides being pissed away on maintaining green monocropped lawns.

In fact, this has already proved to be a successful model in the past. During World War II, the Victory Garden movement, led by the US government, mobilized Americans to turn their lawns into gardens, and by the war’s end 18-20 million Victory Gardens producing 40 percent of household vegetable needs.

Imagine what could be achieved now—with all the media tools at our disposal! Hence, I thought, why not harness the popular reality TV format and do something useful with it: specifically, get America pulling up their lawns and growing their dinners. This would not only get Americans outside and active, eating healthier food, and increase their food security, but when the proverbial shit hits the fan, more Americans will know how to grow their own food and subsist even when they can no longer rely on driving down to their local Walmart to bulk buy their groceries. In other words, this show could help spark a yardfarming revolution that could help futureproof America against the coming disruptions.

Cullen: So your hope is to follow along as a group of Millennials try their hand at yardfarming? Will these be actors? Real people? How will you find them?

Erik: Definitely real people! This is an example of REAL reality TV, not scripted with lots of clips of surprised contestants recycled over and over to add fake drama.

We’re actively searching for six individuals who feel excited about spending 2016 living the post-consumer dream, converting acres of lawn in their neighborhood (not just in their backyard but every viable space they can get access to) into new sources of sustainable food, community resilience, and security. Or at least try!

Some surely will fail, thanks to neighbors wedded to the suburban “green grass” ideal, or because of drought, pests, even fed-up parents perhaps!

Right now we’re in the search process. We’re looking for six young Americans to move back home with their parents or other family, and yardfarm during the 2016 growing season. The call for contestants is open—with the first deadline upcoming on August 1st. You can apply at http://yardfarmers.us/call-for-contestants/. Or if you know someone who might be interested, please spread the word!

Cullen: Why have contestants move back in with their families?

Small families living in giant houses is not sustainable, nor is it resilient. The Great Recession showed how easy it is to lose one’s home and how rapidly recessions increase youth unemployment rates.

Having multiple generations living together is a time-tested strategy for secure and resilient living. Parents may hold their formal jobs, youth may be yardfarming the neighborhood and be involved in the budding informal (or what Juliet Schor calls the “plenitude”) economy, elders may be caring for the kids while the kids help take care of their grandparents and the yardfarm and household. That’s how we’ll make it through future Great Recessions and climate contractions. So celebrating (while also exploring the challenges of) multigenerational living is a big part of Yardfarmers’ mission.

Cullen: How’d you first come up with this idea? 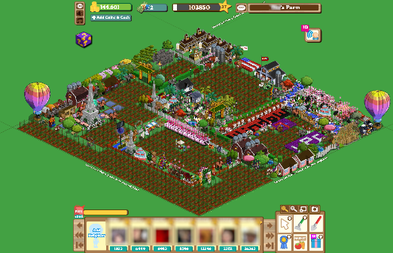 Screenshot from FarmVille via Wikipedia

Erik: Actually, back in 2010 I started to see people becoming obsessed with the game FarmVille—not just in the U.S. but even in other countries. This global phenomenon fascinated me, and so I gave it a try—and quickly wrote a screed calling the game company Zynga out, proposing to them if the company really wanted to do something useful, it would not just get people clicking their mouses to ‘play farmer,’ but help teach the next generation to be farmers—an essential development considering that the consumer system is destined to implode in that generation’s lifetimes from a rapidly changing climate and the breakdown of other essential ecosystem services. While Zynga never responded, the idea took root over the years and then at the end of 2013 I received a seed grant to develop the concept from the V. Kann Rasmussen Foundation. At that point, I started watching way too much reality TV, talking with a lot of directors, and eventually discovered Katy Chevigny of Big Mouth Productions, who became my co-conspirator in this endeavor.

Cullen: So when you’re not promoting yardfarming, are you out farming your yard?

Arugula is great as it sprouts up everywhere, even where it’s not supposed to.

Erik: Not as much as I’d like I admit. I’m a pretty lazy gardener. I grow things that grow themselves. The soil where I live in Washington, DC is more broken brick and glass than organic matter, though each year it’s a bit better as we add the compost our household creates. So I don’t bother with fickle plants like tomatoes but just harvest greens, sunflowers, perennial herbs, and things that sprout up from our compost. For example, I didn’t plant squash this year but have five squash plants growing. Even more than yardfarming, I mostly forage wild edibles: “weeds” like dandelions, chickweed, violets, and lamb’s quarters, mulberries (which are abundant in DC), fruit from random fruit trees (several grow on old school properties near me) and acorns—a great source of nutritious flour with the right processing. Though in the last few years, I’ve focused more on symbolic gardening to get my toddler son excited than trying very hard to produce quantity. Once he’s a bit older, I hope that together we’ll start yardfarming a much larger area. After all, children should earn their keep too! And there’s no downside to learning farm skills early, not when the future is what it is.

2 Responses to “Futureproofing America with a Yardfarming Revolution”